The Haus That Zumthor Built

Coming out of Germany, Bregenz, Austria was our first stop on the journey East. This is where the alps really come into play as you are usually surrounded by mountains. I guess you officially know your you are getting into Switzerland when you have to stop on the road to allow cows to pass. 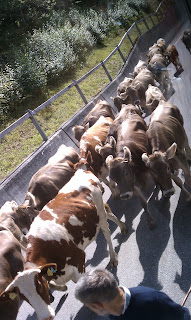 This part of the tour is pretty much about Peter Zumthor and his creations. First on the list was the Kuntshaus, a gallery in the middle of the city, next to the river. The building seeks to let the art speak for itself and not have the architecture or the scenery take away from it. The outside is clad in a rain screen of glass panels that are overlapped to give a layered effect. The panels themselves are opaque and allow allow filtered light in instead of direct views outside. The current exhibition was quite disturbing and included deformed stuffed animals and strange music, not the kind of place you want to be in for a long time. The galleries are well lighted but it makes you feel closed in, especially when the exhibits have a creepy atmosphere.
The hostel here was not a fun experience. The age level of our fellow inhabitants decreased to middle school age and made eating in the dining hall a interesting experience. I also had the luck to get stuck in a small room with six other roommates and one bathroom. One of the other problems was the hostel was too far outside the city to do see anything when you are bored.
Luckily, we were headed to Vals, Switzerland, for Zumthor's Thermal Baths. The road to the resort was a little terrifiying as we were driving on the side of the alps in a huge bus with blind corners. The view from the hotel was amazing as it was situated right in the middle of the Alps. The spa itself was so relaxing and just the thing I needed to rest up. The spa is divided into several different baths. A cold bath (which is indeed very cold, I only got in to my stomach) a hot one (which was my favorite), a flower one (bits of flowers float in it to keep you smelling good, especially after long bus rides), and several regular pool areas with one being outside. They also had a very nice sauna with three levels of steam, the hottest being where I spent a good portion of time. The nicest moment was going in during early morning hours and feeling the mist hit your face when you're outside in the water, starring up at the mountains. This has been one of the most enjoyable parts on the trip so far, it just too bad that photos were not allowed inside.


Leaving Paris tomorrow for London, expect that within the next week.
Posted by Joshua Thomasson at 5:01 PM